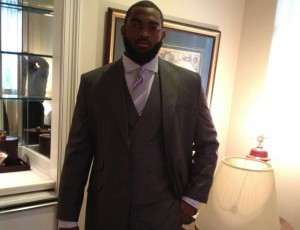 I’m sure you’ve heard of dressing for success and how it applies to NFL Draft prospects on Draft Day in downtown New York but I’ll bet you’ve never heard of the man behind the scenes that makes all the magic happen.

Clarence Jones, of CJ Custom Clothier, has been working with athletes, performers and entertainers for years and will be working with a large group of NFL Draftees once again this year.

Jones represented some of the best dressed draftees in last year’s draft as well, which included Denver Broncos second overall pick Von Miller and the number five overall selection Patrick Peterson, now of the Arizona Cardinals. The suit Peterson wore for last year’s draft was one of the top rated suits as voted by Bleacher Report recently but another custom suit was talked about even more as one of the best combos at last year’s Home Depot Awards Show when he took home the Chuck Bednarik + Jim Thorpe Awards in a sharp grey pin-striped suit w/ pink and white stripes to compliment.

The fact of the matter is that if you have watched the NFL Draft for the last few years, you’ve already seen some of CJ Custom Clothiers work on television, as Jones’ has made suits for a number of recent first round picks, working with the Detroit Lions’ Ndamukong Suh to St Louis Rams’ Robert Quinn to Saints defensive tackle Sedrick Ellis.

What’s possibly more impressive than Jones’ list of NFL clients is the large group of NBA players he works with. He has made a variety of shirts for Shaquille O’Neal, as well as a number of suits for all-time greats like Danny Manning, Gary Payton and Tim Hardaway. His list of current NBA clients includes Atlanta’s Joe Johnson and JaVale McGee now of the Denver Nuggets.

Jones also works with a number of NBA draftees each season, with both Markieff and Marcus Morris taking home the “NBA Draft Best Dressed” Award in the 2011 NBA Draft according to mancavesports.com.

He’s already working with a number of prospects that include Thomas Robinson of Kansas and soon to be first round draft pick John Henson of the North Carolina Tar Heels. (pictured right)

Perhaps one of the most unique aspects of Jones’ work is his vast experience working with athletes and larger men, with his most recent suits pictured, Brockers at 6′6″ 325 lbs and Jon Henson at 6′10″ 220 lbs.

“A suit not only shows that you want to dress accordingly but it also shows that you are willing to fulfill that image that talent evaluators want to see.” said Jones; “Perception is the reality and NFL GMs will treat you accordingly”.

Jones’ suits typically start around the $1,300-$2,000 range and his shirts range in the $135-$225 area depending on the fabric. He uses the finest wool and cashmere from Australia, Italy and London but he also delivers 90% of his clothing in person.

Per Jones; “It typically takes three to four weeks to finish your order but after five weeks you don’t owe anything more on the balance.

“A suit helps your marketability and I think more agents should encourage their players to not only wear a suit for draft day but more importantly for their interviews because in all cases that confidence and perception can be a huge help with team decision makers.”

Some of CJ Custom Clothier’s current NFL clients include Super Bowl champions like Morgan Burnett of the Green Bay Packers and Tracy Porter, formerly of the New Orleans Saints, now of the Denver Broncos.

“I want guys to understand that I’m all about relationships and customer service.” said Jones.

“I drive and fly to see everyone in person because my work means a great deal to me and I take pride in how my clients look. Dressing for success in any phase of life is very important.”

For more information on Clarence Jones’ work and where he can be contacted, you can e-mail cjcustomclothiers.cj@gmail.com or call Mr Jones directly at 901.378.8273.

If you would like to see more of his designer and custom suits, simply turn on the TV on the evening of April 26th for the NFL Draft and you’ll see plenty of fine examples of his artistry in clothing.