DRESSING FOR SUCCESS IN THE NFL 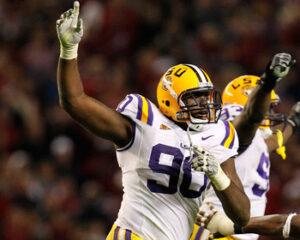 The NFL version of the celebrity red carpet scene plays out every April at the annual draft in New York. Poised to become millionaires upon signing their first contract, the latest incoming rookie draft class of first-round draft picks are dressed to the nines in custom-made suits and shirts.

The demand to look sharp when walking across the stage to shake hands with NFL commissioner Roger Goodell and pose with their new team’s jersey and hat has created a cottage industry for fashion mavens like Clarence Jones, the owner of C.J. Custom Clothiers out of Memphis, Tenn.

“I want guys to understand when you wear suits people look at you different,” Jones said in a telephone interview. “When you’re wearing a suit, you have a different marketability. You want to look good and feel good. If you’re going for a job interview, you want to dress for the part.”

Jones made a grey three-piece suit for the 6-foot-6, 325-pound Brockers that includes a purple and grey striped tie and matching purple striped shirt.

“Michael’s girlfriend jumped through the roof,” Jones said. “She said she had never seen him look this good in her life. Michael should be one of the best, if not the best dressed guy at the draft.”

“One reason I don’t have is a website is a lot of people like to copy,” Jones said. “I don’t like to duplicate. A lot of people wanted me to make them the same dress shirts I made for Steve Harvey.”

At the draft last year, Miller sported a suit made by Jones and also rang the closing bell at the New York Stock Exchange.

Among his other clients: NBA player Joe Johnson as well the Morris twins, Markieff and Marcus, who won a best-dressed award from mancavesports.org , several college basketball coaches and sports agents, including Joby Branion, who represents Miller.

Jones uses fine wools and cashmere from Australia, Italy and London for the suits, crafting the shirts from Italian and Egyptian cotton. Roughly 90 percent of the suits are hand-stitched.

“That’s the style people want right now,” Jones said. “You want to be modern and sharp.”

Jones hand-delivers the suits to his clients, piling up the miles.

“I drive and fly a lot to go see everyone,” said Jones, who can be reached at 901-378-8273 or at cjcustomclothiers.cj@gmail.com. “Customer service is what I’m all about. It’s all about relationships. It’s never about money. I’m low-key and humble and I love what I do.”

“Most of my clients are younger players,” Jones said. “I go for younger players who need a sense of style. Dressing for success in any phase of life is important.”

For more coverage of the NFL, go to profootball.scout.com.